teach the next generation

BECAUSE EVERYONE HAS THE POWER TO EFFECT CHANGE Learn MoreGet Started
Women-refuseniks and their children. Moscow, Ovrazhki, 1979, co RS. Photo source: http://kosharovsky.com 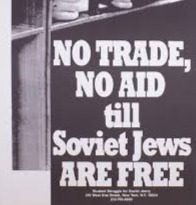 Lesson of the Month

With a rare combination of basic mathematics and history, we will explain the USSR’s line of thought regarding the exit of citizens from its borders, the diploma tax they gave to strengthen the exit restriction, and the Jackson-Vanik Convention that imposed restrictions on trade between the US and the USSR.

Through a simple mathematical calculation, false claims and statements can be proven wrong. For example, the Soviet government stated that they let Jews out without any problem: in 1968 they let 379 Jews to leave. But how many Jews were in the USSR? How many asked for an exit permit and received a refusal? And how many were afraid to ask?

The Story Of the Refusenik Project

The Lookstein Center is continuously looking for educators, projects, and ideas to support, enhance, and disrupt the Jewish educational ecosystem. When we met Anat Zalmanson-Kuznetsov, a renowned Israeli filmmaker dedicating her life to sharing the story of her parents and the population of Soviet Jews, an obvious partnership was born.

The story of Soviet Jewry is one of Jewish solidarity, bravery, and of the power of individuals to effect real change. The process of igniting Jewish identity in the USSR and of liberating the population was one of the most defining and unifying events of the last 50 years for the Jewish community, and yet there are so few organized resources for teaching this period.

While researching for her film Operation Wedding, Anat witnessed first hand that Jewish solidarity can change the course of history. She found rare archives, interviewed former key KGB members, and uncovered a web of lies, rewritten facts, and political secrets. She found that the collective memory of the plight of Soviet Jews is fading and that there is little documentation.

The Lookstein Center has created a collection of lesson plans and educational activities to complement these findings, and to teach the next generation that all Jews are responsible for one another and that every single individual can make a difference.

We also opened a public call for additional educational materials. We have been overwhelmed by the responses, not only by but by Soviet Jews and children of Soviet Jews wishing to share their own stories. We have curated the submissions of artifacts, photographs, first-hand accounts, videos, and resources and are excited to share this free resource with the Jewish educational community.

The creation of The Refusenik Project would not have been possible without the support, commitment, and passion of our generous donors and partners. Thank you.